On June 1934, Saint Mary’s High School unfolded its portals to intermediate graduates to train them further for broader fields of   endeavors with Rev. Father Godfrey Lambrecht as Director and Sister Margareth Hermus as Principal.  It opened with an enrolment of 40 first year students.  Thus, on March 1938, thirty-three seniors (16 boys and 17 girls) solemnly marched to get their much – coveted diplomas.

From SY 1934-1935 to SY 1956-1957, Saint Mary’s High School was co-educational.  The SY 1957-1958 saw the separate school compounds of boys and girls with the Boys’ High School housed in the convent annex (present quarters of the Prelate of Bayombong) and the Girls’ High School in the ten-room building in front of the Sisters’   Convent, now the Lunduyan Pastoral Center.

From 1973 onward, all high school classes were held at the Saint Mary’s High School buildings located behind Saint Dominic Cathedral.

On December 8, 1985, the laying of the cornerstone of the SMU High School Science Laboratory building took place.  Ready for higher leaps in educational endeavors, this new building was blessed and   inaugurated on July 26, 1986.

Saint Mary’s College High School Department underwent Level I Accreditation in 1988 by the Philippine Accrediting Association of Schools, Colleges and Universities (PAASCU) to manifest its sincere mission to quality education.  With the issuance of DECS Order No. 73, s 1992, Saint Mary’s High School enjoys the benefits of Level 2 accreditation status.

On April 1992, a new building was started and finally blessed on December 8, 1992 which now houses the Science High School        classrooms, the Multi-purpose Hall, the Medical and Dental Clinic, and the Guidance Counselor’s Office.

In the quest for academic excellence, Saint Mary’s University High School (SMUHS) underwent a formal and rigorous evaluation by the PAASCU on September 11-12, 1995. After three years, on October 17 and 18, 1999, the PAASCU revisited the high school, which resulted to its Level II Re-accreditation status for 5 years.

On September 1998, the CHSF program was born.  The CHSF or Clean, Healthy, Safe and Friendly program primarily aims to enhance the importance of a sustainable and eco-friendly school environment.

During the SY 2000-2001, the curriculum developers of the high school applied for a permission to operate the SMU Science High School pursuant to DECS Order No. 69, s 1993.

This has been a major revision of the science curriculum since 1970.  The DECS Regional     Director approved its implementation for SY 2001-2002 through a letter dated December 15, 2000.   Thus, SMU now has two high school programs: SMU Science High School and SMU High School.

On April 2002, the new administration building was constructed.  This was blessed on January 24, 2003 to house the Technology and Home Economics classrooms, High School chapel, some administration offices, faculty room, and some classrooms.  Furthermore, the school playground was paved on April 2003.  One of its faculty members and the first Novo Vizcayano emerged as National Awardee in the 2003 Metrobank Foundation’s Search for Outstanding Teachers, also one of 2004 Ten Outstanding Filipino Teachers (1985-2004) and recipient of the 2005 International Visitor Leadership Award by the US Embassy in the Philippines.

In school year 2005-2006, the Grade 7 High School students started becoming recipients of the Education Service Contracting (ESC). The ESC provides a fixed tuition subsidy to graduates of public elementary schools who opt to enroll in participating private high schools like SMU HS & SHS. As a result of PAASCU accreditation and the increase in    enrollment, the slots for ESC grantees for incoming Grade 7 became 100 % starting school year 2013-2014.

On February 10, 2005, the High School Digital Internet Laboratory with teleconferencing facilities was blessed to serve as an international linkage with West Flanders, Belgium through the initiative of Fr. Gerry Bouckaert, CICM in partnership with the political leaders of the said province under the governorship of Hon. Paul Breyne. This laboratory serves as High School students’ and faculty’s window to the world.

On April 2005, the new stage was built and at the same time the main and old building was partly demolished for the phase two building construction.  The HS stage was blessed on June 15, 2005. The Florentina Building, a 4-storey structure, was blessed on March 31, 2006.   It houses the   High School Library and Digital   Internet Laboratory, eight classrooms, offices and a multipurpose roof deck.

To promote wider readership and cultural literacy among high school students, a reading program called The Search for Florentina Best Reader was launched on October 25, 2006 in commemoration of the death anniversary of Florentina Bouckaert Desmet, a Belgian     benefactor in whose honor the program was named.

On November 28, 2006 the Marian community launched the     yearlong celebration of the 100 years of the CICM in the Philippines.

Through the generosity of Belgian benefactors, the CICM           Centennial building was erected on April 2006.  It was blessed on     December 23, 2006 coinciding with the General Alumni Homecoming.

In a Regional DepEd letter dated March 11, 2007, SMUHS/Science HS was granted a permit to issue diplomas even without Special Orders provided that it maintained its clean slate accreditation.

On April 26, 2007, the library extension was built for fiction      reading section and was named Rita’s Reading Corner in honor of Dr. Rita Bouckaert, the author of the Search for Florentina Best Reader and a generous benefactor of the rich collection of fiction books in the library. It was blessed on August 10, 2007.

Beaming with pride for the success of one of its alumnae, the school celebrated the visit of Miss Janet Belarmino, Batch 1994, on June 29, 2007. She was one of the three Asian women who traversed for the first time Mount Everest, the tallest mountain in the world.  It is also historic to note that the school was able to produce its biggest pool of CAVRAA    players    and     Palarong     Pambansa qualifiers in Badminton, Lawn Tennis and Volleyball.

On May 2008, the covered walk was built.  Its construction was  made possible by a fund raising drive dubbed as “A coin-a-day will build a covered walk someday.” and by the financial help coming from  parents, alumni, the administration, and Fr. Gerry. It was blessed on June 27, 2008.

The school won a national recognition in the 2008 National Essay

Aside from being a recipient of the ESC or tuition subsidy for students as mandated by RA 8545, SMU HS & SHS faculty also started being recipients of the Teacher Salary Subsidy (TSS) from the government in school year 2009-2010. Under the guidelines provided by DepEd, ESC participating school teachers who have updated licenses from the Professional Regulation Commission are entitled to the initial P12,000 a year subsidy. As of school year 2018-2019, the subsidy has increased to 24, 000.

In its continuing quest for quality education, SMUHS & Science HS underwent reaccreditation by the PAASCU on February 7-8, 2011. On September 12, 2011, PAASCU granted the school Level 2 Reaccredited Status.

The school engraved its name for the first time in a Southeast Asian Sports Competition when Vidal Marvin Gabriel bagged a bronze medal in the 10th ASEAN Taekwondo Championship at the Olympic Stadium in Phnompenh, Cambodia, April 7-9, 2011.

Starting SY 2014-2015, SMUHS and SHS became brown-out free with the installation of a Generator Set. It was also the 80th  year anniversary of the high school department.

For SY 2015-2016, due to unprecedented increase in enrolment, the chapel located in the second floor of the Administration building was converted into classrooms. The roof deck formerly used as multipurpose hall was in turn converted into a chapel.

To enhance delivery of instruction, SMUHS and SHS adopted the Genyo e-learning technology beginning SY 2015-2016. LED TV is       provided in every classroom. Moreover, to beef up the campus security, CCTV was also installed to strategic locations in the campus.

In the same school year, the first batch of 244 K to 12 Junior High School Completers marched during the First Moving Up Ceremonies

Pursuant to the Enhanced Basic Education Act of 2013 (RA 10533), the K to 12 Curriculum was first implemented in school year 2012-2013. The K to 12 educational reform mandated the addition of two years of basic education in Senior High School (Grades 11 and 12). It prescribes a learner-centered, learning-outcomes-based pedagogy that develops 21s century skills with the end goal of developing a   globally competitive life-long learner. Consequently, with the offering of the Senior High School Program in school year 2016-2017 (college campus), SMU HS & SHS became SMU Junior High School and Science High School.

The administration recognizes the vital role of infrastructure      development in providing support for quality education. Thus, on May 2015, the groundbreaking ceremony for the construction of a new seat of learning, Fr. Clement Daelman, CICM Building at the former         Marian Park was held. The new edifice was blessed on September 8, 2016 in time with the celebration of the birthday of the school patroness, Mother Mary. It houses additional classrooms, Science   Laboratories, Robotics Laboratory, and the Sports Gymnasium.

In recognition of the demand for technological advancement and the development of critical thinking skills, the school subscribed to STEM with Robotics Education from First Eduspec Inc. starting school year 2016-2017. The school’s first participation in the 6th National   Robothon on October 27, 2018 landed the participants second runner-up.

As a result of the school’s pursuit of excellence, SMU Junior High School & Science High School was declared as Grand Winner in the Batobalani National Science Investigatory Project Competition on March 12, 2018. The winning project, Pytochemical Screening,  Antimicrobial and Cytotoxic Properties of Pikaw (Colocasia SP. CF.  Formosa Hayata) was an output of Samuel Levine Soliven, Felice Alexandria Sadueste, and Ferylene Valentin. Infrastructure development in school year 2018-2019 jumpstarted with the construction of Patio Theophile, a study shed for students. This was a project of the Parent-Teacher Association (PTA) for school years 2017-2018 and 2018-2019. The construction started with a groundbreaking ceremony on November 9, 2018 and was blessed on December 19, 2018.

Thus, from modest beginnings, Saint Mary’s University High School & Science High School is growing and is developing in human resources, facilities and services as its sincere commitment to the mission of Christian education.

To God be the glory! 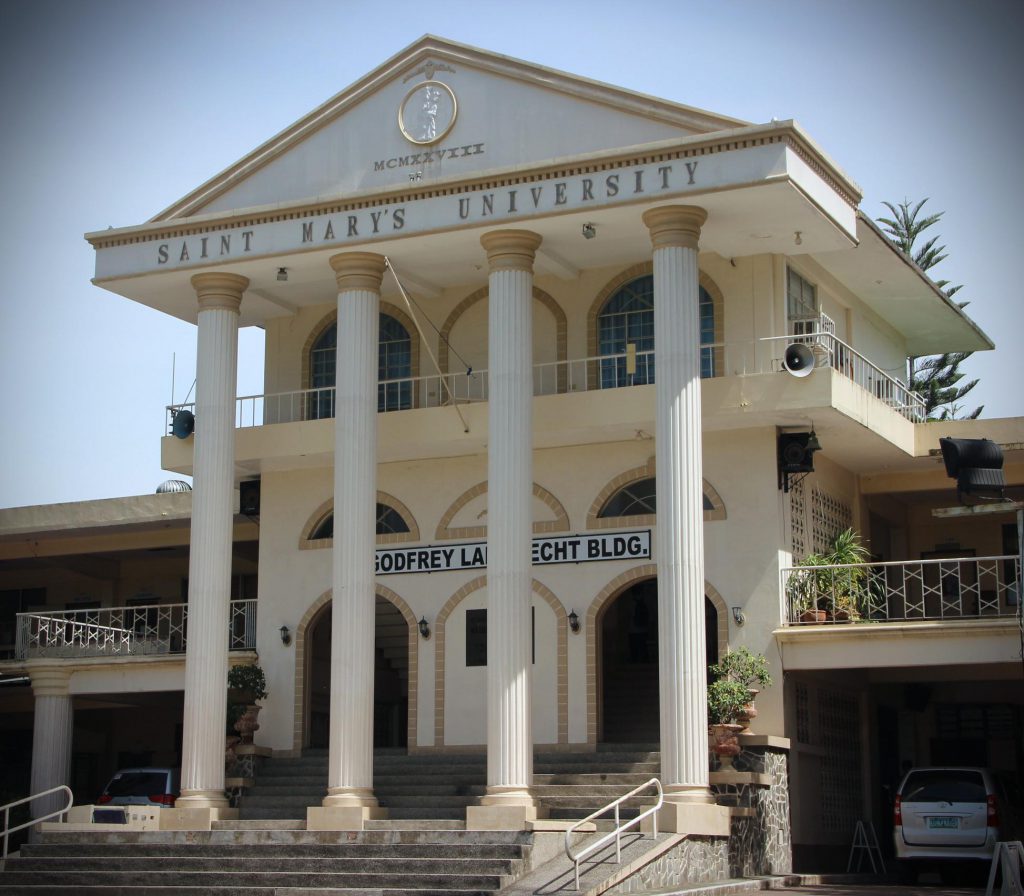