Saint Mary’s University through the Admissions and External Relations Office is envisioned to be a premier, vibrant, and diverse university offering undergraduate and graduate programs and conducting national and international collaborative activities along the areas of research, instruction, cultural exchange and other academic partnerships.

Through its linkages, the office works on providing to its students and employees opportunities for national and international exposures and experiences.

The Admissions and External Relations Office used to be an attached office to the Alumni Affairs Office in 2009, named Center for Alumni Relations and External Affairs (CARE) office, where Dr. Caroline M. Acosta served as Director for a period of one year.  In keeping with the University’s mission of forming competent, creative, community-supportive, and Christian disciples, CARE envisions to emerge as the leading center for local and international academic and professional linkages in Northern Luzon, Philippines.

Prior to the establishment of an office that takes care of these functions, the University has established partnerships with local, national and international institutions and organizations primarily through the office of the Vice President for Academic Affairs.  Local and national linkages include partnership with the Department of Environment and Natural Resources, National Economic and Development Authority, TESDA, Department of Trade and Industry, Regional Development Council, Civil Service Commission, Texas Instruments, Miriam College, Department of Agriculture, Saint Louis University, and University of Saint Louis Tuguegarao, among others.  The nature and type of linkages were mostly training and workshop, environmental enhancement projects, twinning programs, and consultations.

In the international domain, Saint Mary’s University had also established linkages with the British Council, United Nations, the International Monetary Fund, Informatics in Singapore, the Open University of Hong Kong, Catholic University in Louvain in Belgium, Queensland University of Technology and University of Brisbane in Australia, University of Austin in Texas, College of William and Mary Department of Anthropology in Virginia, USA, Summer Institute of Linguistics in Dallas, Texas, Yale University in Connecticut, USA, and the  Ascension Health in Missouri, USA, even before an office for external relations was created.  Partnerships were along the areas of sharing of resource materials and publications, consortium on program and training, training of PROBE fellows, collaborative research, and recruitment of Filipino nurses for hospitals in the U.S.A.

In 2006, Saint Mary’s University signed a Memorandum of Agreement (MOA) with KCP Holdings, Ltd. for a period of five years.  This agreement allows KCP to become as SMU’s course operator of its BS Entrepreneurial Management (BS EM) and BS Civil Engineering (BS CE) programs in Hong Kong.  It has produced graduates of BS EM and BS CE from the Philippines, China, Hong Kong, Nigeria, and the USA who are based in Hong Kong. Every year, KCP has to submit a quality assurance report to the Bureau of Education in Hong Kong.  A new five-year MOA was signed last August 16, 2012.

Another MOA was forged with an educational institution in Spain in 2007.  It was an exchange agreement between Saint Mary’s University and University of the Basque Country (UBC) signed by then President of SMU, Rev. Fr. Manuel D. Valencia, CICM and Rector of UBC, Dr. Juan Ignacio Perez Iglesias.  Ms. Sundae Calata, a BS Nursing graduate of SMU participated in this student exchange program.

In 2008, an academic agreement inked with Universiti Utara Malaysia (UUM) in Kedah State, Malaysia provided an opportunity for the SMU Choral Society to perform at UUM during their 22nd convocation last October 3, 2009.  The Memorandum of Understanding (MOU) indicated planned cooperation along research, faculty and student exchanges, and conduct of undergraduate programs.

On the same year, SMU signed a five-year agreement with Bayero University of Kano, Nigeria which resulted in a research grant awarded to both universities by the British Council of Abuja, Nigeria.  The 3-year research project was implemented in 2010 and ended in 2012.  A research output and a training module on agribusiness for rural farmers were developed and were used to conduct trainings to selected farmers in the Philippines and Nigeria.

In 2010, the University President, Rev. Fr. Renillo H. Sta. Ana, CICM, saw the need to create an office that will take care of the expanding opportunities for the University’s international linkages.  This paved the way for the birth of the External Affairs Office, which was handled as a concurrent function of the VP for Administration, Dr. John Octavious S. Palina.

In SY 2011-2012, the VP for Academic Affairs, Dr. Moises Alexander T. Asuncion took over as concurrent External Affairs Officer.  This function was again assumed by Dr. Palina, in concurrent capacity as the VPA, in SY 2012-2013.

The first exchange professor from IMT, Prof. A. Ram, came to SMU in January 2014 to teach marketing management topics to undergraduate and graduate students in Business.  Dr. Gertrude Danao from SMU went to IMT in the same month and year to teach Management Information System to their Post-Graduate Diploma in Management students.

In order to enrich the students’ learning at Saint Mary’s University, the university entered into a tripartite agreement with Saint Louis University and Adamson University, Manila in 2013.  The agreement covers partnership along the areas of sports and cultural development, instruction, and research.  It was also on the same year that the University, through the EAO, received a grant from the Fulbright Commission in the Philippines (or the Philippine American Educational Fund) for a US Senior Specialist who conducted a 10-day crash program on Entrepreneurship.  Dr. Javad Kargar from North Carolina Central University also served as a resource person during the regional conference in August 2014.

The collaborations did not end with the mere signing of MOUs.  In 2015, the International Relations Director of Alexander Xhuvani University together with the university’s Deputy Rector visited Saint Mary’s University to further discuss how the partnership agreements may be carried out.  During their stay at SMU, they served as Guest Lecturers to undergraduate and graduate students of SMU. The university also received two researchers from another partner institution, Fu Jen Catholic University in Taiwan who served as paper presenters in the First International Conference on Cultural Studies held at Saint Mary’s University.

Outside the ASEAN region, Saint Mary’s University signed MOUs with South Korean universities namely, Joongbu University (JBU), Seonam University (SU), and Hwashin Cyber University (HCU).  In 2015, the first collaboration project between SMU and HCU, which is the offering of a Korean language course to SMU students and conduct of English language tutorial to the Korean teachers, was implemented.

The university continues to expand its partnership agreements with various institutions outside the country.  In 2017, it entered into a partnership agreement with Bellarmine Global Education (BGE) in Bangkok, Thailand on the offering ETEAAP and graduate programs and with Saint Louis University, Philippines and Coventry University, United Kingdom on the offering of a Master in Science in Disaster Risk Reduction and Management (MSc DRRM).  In the same year, Saint Mary’s University signed up with Twelve (12) educational institutions from Asia for Asia Cooperation Dialogue (ACD)-MBA program.  The institutions and their respective countries are:

Through this ACD MBA, a graduate student from SMU may be given an opportunity to have short study visit to be delivered as intensive workshop in a hosting university followed by case studies talk and/or visit to local business community. Other modes include short-term placement at a hosting university such as for one semester or more to undertake some selected courses or doing a research project paper and registering as an online learner of a partner-university for self-learning, guided by online learning materials from partner-university or using blended learning by supplementing on-site tutorials at a sponsoring university.

These partnerships forged with institutions locally and abroad were presented to the academic units for their implementation.  The aspect of linkage and networking is greatly highlighted in the 2019-2021 Medium Term Development Plan of the university.

The outcome of the linkages forged with various institutions especially along student exchange was realized starting in SY 2016-2018. SMU sent its senior BS Education students to Indonesia and Thailand for the Southeast Asia Teacher Project (SEA Teacher Project) at the same time that it has also accepted students from Indonesia and Thailand to participate in this student exchange program.  The students were deployed to various schools for their one-month internship program.

SMU is also one of the four HEIs in the Philippines, which partnered with Howest University and Vives University in Belgium for the three-year Southern and Northern Intensive Programs (SIP/NIP).  These intensive programs allow Belgian and Filipino students to work on cases along the following domains:  Sustainable Agriculture, Climate Change, and Entrepreneurship.  At the end of the two-week program, the students, with the help of their coaches, will come up with solutions to these cases.  SIP takes place in the Philippines while NIP will be carried out in Belgium.  This three-year program is part of a bigger project (Synergy Project) that is funded by West Flanders in Belgium.

The South Intensive Program kicked off last February 2019 at Saint Mary’s University where 31 Belgian students and coaches worked together with 32 Filipino students and coaches on four cases across the above-stated domains.  The ambassador of Belgium to the Philippines graced the closing and awarding ceremonies of the SIP.

Starting SY 2018-2019, SMU has accepted three foreign students from Germany, Turkey and Japan who have participated in the American Field Studies (AFS) Intercultural Programs.  Prior to their arrival, SMU signed a MOA with AFS Philippines and organized an AFS-SMU campus cub, which was tasked to scout for volunteers and host families for international students who will be studying at Saint Mary’s University.

In the area of research, SMU has collaborated with Dr. Keith Miller from Flinders University, Adelaide, Australia.  He has conducted research capacitation workshops at SMU in 2017, 2018 and 2019.

In order to expand its partnerships with educational institutions in South Asia, SMU signed a MOU with Central Institute of Business Management Research and Development R.T.M. Nagpur University in Maharashtra, India.  The MOU, which was signed in July 2018, covers academic exchange and cooperation along the areas of faculty and student exchange programs, exchange of written and published academic materials, educational materials, and cooperation in organizing academic conferences on issues of mutual concern.

This school year 2020-2021, an independent office, the Admissions and External Relations Office (AERO), is created to take charge of the expanding national and international collaborations and partnerships of the University. Dr. Clara M. Gonzales was appointed as the head with Mrs. Charo Marie T. Dacles as the Secretary. Aside from linkages, AERO is also responsible for first year admissions to the University. 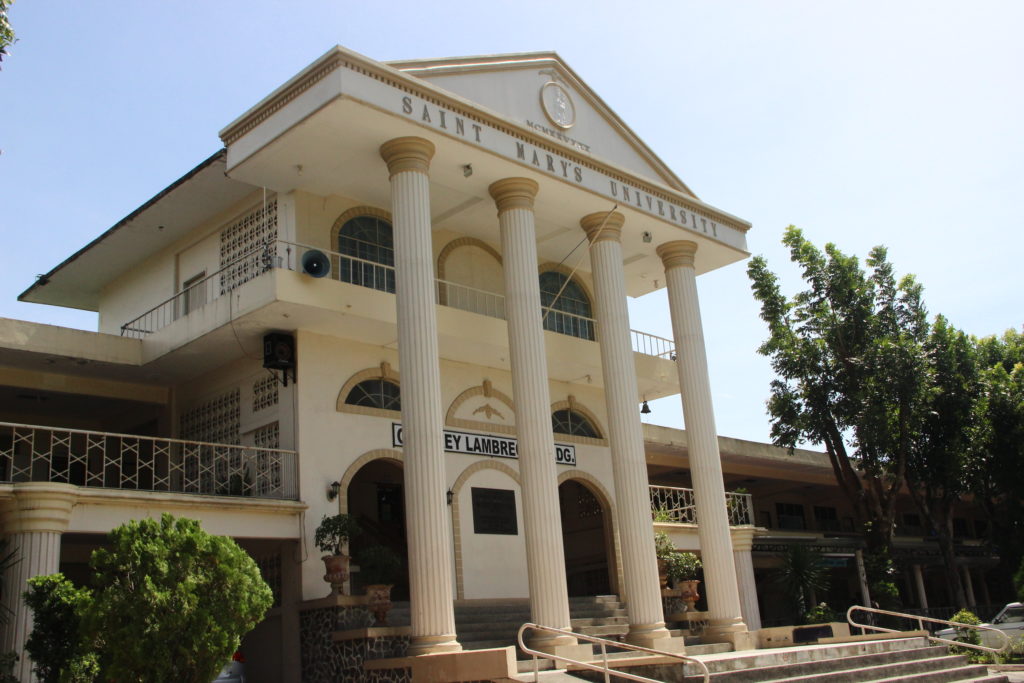