The School of Engineering, Architecture and Information Technology is envisioned as a leading institution in providing education and training for the formation of Engineers and Architects who are globally competitive builders and creators of beauty and efficiency imbued with the values of honesty and integrity.  It aims to provide education for Engineers and Architects in harnessing natural resources and in creating utilities and improvements for the sustainable growth and development of man’s institutions, culture and civilization.

The first engineering school in the Cagayan Valley Region, the Engineering Department of Saint Mary’s College (SMC) was established in 1955 by Rev. Paul Zwaenapoel, CICM, then the SMC Dean and pioneer faculty Engr. Ruperto A. Bayabos Sr.

Early in the history of SMC (now Saint Mary’s University) under the administration of Rev. John Van Bauwel, CICM, its developmental moves included the changing of status of the departments to colleges.  The Engineering Department became the College of Engineering with Engr. Ruperto A. Bayabos, Sr. as the first dean with the following courses under it: BSCE, AGE, CSA, and BSChem (later placed under the College of Arts and Sciences in 1994).  Three departments were formed: Department of Civil Engineering, Department of Geodetic Engineering & Surveying, and Department of Engineering Mathematics.  With this changes, came growth and development in several areas like physical plant, equipment, faculty, library, curriculum, and the like.

In June 1995, the Civil Engineering Program of the College was accredited by the Philippine Accrediting Association of Schools, Colleges and Universities (PAASCU) to level 1 and was elevated to Level II in April 2001, re-accredited in 2006 for 5 years until May 2011.Then in May 2012, the Civil Engineering Program was awarded Level III PAASCU Accreditation by the FAAP.  It was re-accredited on May 2017 for 5 years until May 2023.  The accreditation is a proof that the School of Engineering, Architecture and Information technology is comparable with other engineering schools in the country.

Another breakthrough of the College was its selection in 1999 by the Commission on Higher Education (CHED) as a Center of Development for Civil Engineering (COD-2).

Because of the demand for engineering graduates from other disciplines due to advancement in technology and to help create greater access to other engineering disciplines and allied courses in the province and in the region, four (4) new degree programs were offered under the administration of Rev. Jessie M. Hechanova, CICM. These are as follows: BSEE (Electrical Engineering) and BSCoE (Computer Engineering), which opened in the first semester of SY 1999-2000 and BSECE (Electronics and Communications Engineering) and BS Architecture, which opened in the first semester of SY 2000-2001.  The College was then officially renamed College of Engineering and Architecture.

In the second semester of SY 2000-2001, two graduate programs were offered, which changed the status of the College to School of Engineering and Architecture.  These are as follows: Master of Science in Management Engineering (MSME) and Master of Engineering (ME) Program: Major in Civil Engineering.

In July 19, 2006, under the administration of Rev. Fr. Manuel D. Valencia, CICM, entered into a tripartite memorandum of agreement with KCP (Kabayan Center of the Philippines) Holdings and the Technology Education and Development Center Ltd of Hong Kong, China as international linkage partners in the delivery of “home school” (initial) course programs, namely: Bachelor of Science in Civil Engineering (BSCE) via the alternative and continuing delivery schemes.

As the capstone of the delivery process, the curriculum programs of the host- providers and home school- provider (SMU) were mapped and analyzed.  For the degree leading to Bachelor of Science in Civil Engineering, parallel subjects were determined and aligned using the following indices: Hong Kong Certificate of Education Examination: Regulations and Syllabuses issued by the Hong Kong Examinations and Assessment Authority, and the curriculum programs of Hong Kong Polytechnic and Hong Kong Construction Industry Training Authority.

The launching of the BSCE curricular program was held at the KCP Holdings, Inc. on December 9, 2007. Since then, faculty evaluators from SMU evaluated in Hong Kong the projects of graduating Chinese students.

The CHED- Technical Panel for Transnational Education came to SMU for an Inspection Visit, last July 22-23, 2010, of the B.S. in Civil Engineering Program to inspect/verify the extent of implementation/compliance of the following criteria which are expected to be followed by any program with international linkage or operating with transnational education: Institutional Management and Commitment, Curriculum Development and Approval, Instructional Materials Development, Delivery Mode/Strategies, Student Assessment, and Student Support Services.

The Information Technology program was awarded Level I PAASCU Accreditation by the FAAP in November 2014. Currently, the IT Program was accredited as Level II by PAASCU until May 2023.

Saint Mary’s University recognizes education as the most potent tool to achieve national development. Science and Technology education was identified as one avenue by which human resource might be developed. It is a hope for SMU to attain or achieve its goal in its bid for advancement and competitiveness in the global arena. 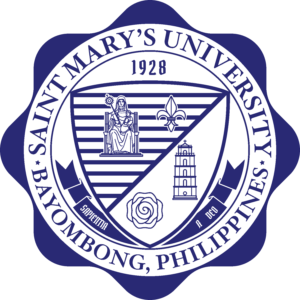